Based on the results and findings of this multi-component failure analysis, the client was able to efficiently remedy the problems with the new machinery design by addressing the weld defect and, thereby, successfully launch the new product line.

Situation
An industrial client experienced an early-in-life (less than two million cycles) failure of newly designed, automated machinery used in the food packaging industry.  The equipment failure involved multiple fractured components: two fractured plain carbon steel pushrods, a fractured low alloy steel ram, and a cracked aluminum air cylinder.  The objective was to determine which component fractured first, the cause of failure, and preventive actions, so that the design and/or manufacturing defect could be corrected. The pressure was on to expeditiously find a solution to the problem in order to assure the financial success of the highly touted new design.

Solution
ESi individually examined each of the four fractured components.  Macroscale visual examination with the aid of stereomicroscopy was performed to identify the fracture origins, the direction of crack propagation, the failure mechanism, the nature of the loads and stresses that drove the fracture, and the contributing roles of design, manufacturing, material, and service (including environmental interactions).  The components were also examined on the microscale using a scanning electron microscopy equipped with energy dispersive spectroscopy (SEM/EDS) to identify the fracture surface morphologies and to confirm the macroscale observations.  Metallographic examination of the microstructures, chemical analyses by optical emission spectroscopy (OES), and mechanical testing (tensile tests and hardness) were performed to determine whether the materials met specification requirements.

Results
The broken components included fatigue and monotonic overload failures.  Determination of the sequence of the component fractures was complicated by the somewhat unique way that the machinery was operated.  The machinery could continue to operate for many thousands of cycles after certain component failures.  The causative and consequential component failures were able to be determined through a combination of metallurgical failure analysis and fact gathering.

The aluminum air cylinder failed by monotonic (single load application) overload, as evidenced by the ductile fracture appearance on the macroscale and by the microvoid coalescence fracture surface morphology on the microscale.  It was clearly a consequence of another component failing first.

The two carbon steel pushrods failed by high cycle fatigue as evidenced by the brittle fracture appearance, beach marks, and ratchet marks on the macroscale and fatigue fracture surface morphology on the microscale.  Usually, the determination of fatigue as the failure mechanism would indicate that this component failure was causative and not a consequence of the failure event.

However, careful examination of the low alloy steel ram fracture indicated it also failed by high cycle fatigue.  A small fatigue crack originated at the root of the partial penetration weld, which served as a stress raiser.  The weld was approximately 33% undersized, which contributed to the failure by increasing the stresses at this location.

The failure sequence was: (1) the ram failed at the weld by fatigue; (2) the load from the ram shifted to the pushrods; and (3) the machinery kept running for tens of thousands more cycles leading to fatigue failure of the two pushrods and instantaneous failure of the air cylinder by monotonic ductile overload. 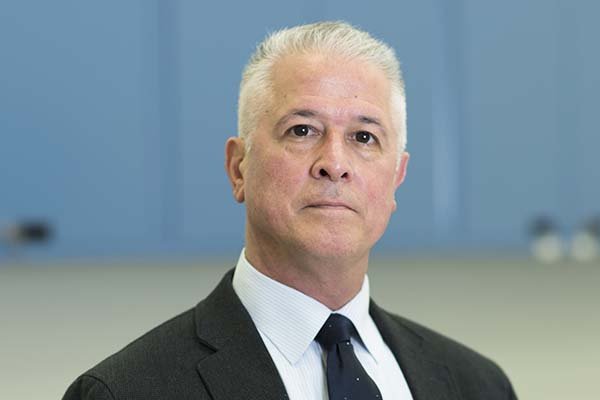